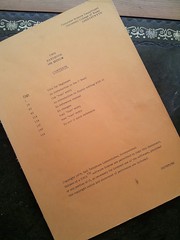 I was able to dig out the “UNIX Handbook” hardcopy manual I referenced in my last post. My memory was slightly at fault; it isn’t so crude as to be in a monotype font, being properly set with troff (except the cover page, which was typed). It’s actually a collection of various introductory UNIX articles from the early V7 and BSD distributions, covering topics such as basic command line use and text editing, along with some useful man pages. Although it is obviously dated, it’s still straightforward and well written by some of the pioneering UNIX engineers like Brian Kernighan and Bill Joy. I’d be surprised if any of the examples would fail to work on a modern UNIX equivalent (note: init system not covered ;-).

Given that I’m still occasionally asked at work for a basic UNIX guide for new users who need some basic familiarity with the command line, I believe this could be as good as anything. Therefore, I’ve Googled online versions of all the constituent articles and put them into a replica HTML document for general edification and amusement. You can find it (and fork it and fix it) at Github.

Some other ancient tomes that I found useful during my newbie patch were: